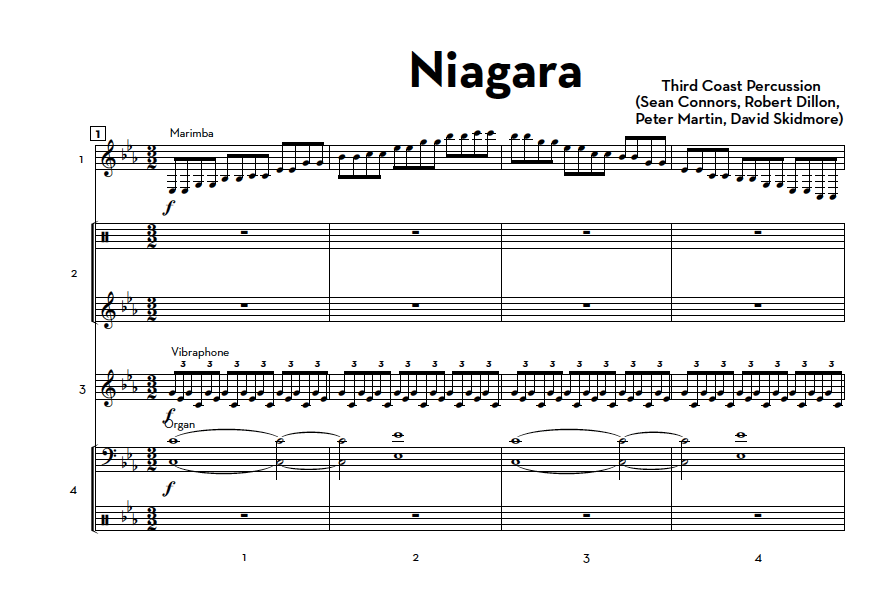 "Niagara" (from Paddle to the Sea) - Score and Parts

The four members of Third Coast Percussion all compose their own music, and in recent years, have worked on projects that involve composing music together as a team. As part of a multi-media performance project, the quartet composed music to perform live with the 1966 film Paddle to the Sea, based on a children’s book of the same name written in 1941. The film tells the story of a small wooden figure in a canoe, lovingly carved by a Native Canadian boy and set on a long journey through the Great Lakes and St. Lawrence Seaway, out to the Atlantic Ocean and beyond. The people who find “Paddle” along the way must choose, rather than keeping him for themselves, to send him further along the waterways, perhaps with a fresh coat of paint or a new rudder. Paddle also encounters danger in his journey, as in this passage, when he goes over Niagara Falls.
Third Coast Percussion’s album Paddle to the Sea, featuring this music, as well as water- themed works that inspired this composition, was released on Cedille Records in February 2018.